The story takes place in our time, in this universe which just happens to have another concentration of humans in the constellation of Taurus. Just as they are unknown to us , we are unknown to them. The cat somehow turned up in this other civilization and he is a very exotic creature there.

Aisha Leman comes from the star Ain, which I now know has a planet! She probably is the real main character. She has become a lot more angry than I had planned.

In my opinion Vetres Steuylens is the most intriguing character. I know a bit more about him than the story has revealed so far but he is still hard to get a grip on. He has a bit of the old Guillaume in him. Sometimes he's quite clever and sometimes really silly and stupid.

This adventure will end after 45 to 50 pages and then there will be a pause of a few months (in the story) until Book Two begins.

I hope that the story in Book Two will be noticably better as it will be written before I start drawing.

Warning: include(../news.php): Failed to open stream: No such file or directory in /customers/f/1/1/tomczak.se/httpd.www/grr/about.php on line 63 Warning: include(): Failed opening '../news.php' for inclusion (include_path='.:/usr/share/php') in /customers/f/1/1/tomczak.se/httpd.www/grr/about.php on line 63 Guillaume's Rambling Ride - Main page

I've always liked comics and animated film. To draw comics was a distant dream not even realistic to strive for.

Then I got older. Internet came and, wow, suddenly I had the tools to publish. I thought that if I die there's one thing I will regret not having done and that's trying to draw my own comic. So Guillaume popped up as the candidate for a main character. The first strips I had done were a bit before this "draw comics before I die" thing and were revolving around professional cycling and Tour de France. Somehow a cat turned up. French of course and in some strips able to have a glass of wine with his friends the professional cyclists and sometimes he was just an extremly stupid cat trying to cross the line just as the cyclists were finishing the sprint.

Then I stopped watching when a lot of my favourite cyclists retired like Laurent Jalabert. It just took too much time to follow this sport. Otherwise I could just as well drawn strips on cycling.

I've always liked space and science fiction so placing the cat out there was an obvious choice. I had never drawn a comic before so the first panels were really difficult to get done staring at the white paper. I decided from the start that I should not aim for perfection or even quality - just do it and learn along the way. The story has been written underhand. Now I know where I'm going and I would probably had made the setting more obvious if I had drawn the first pages today. 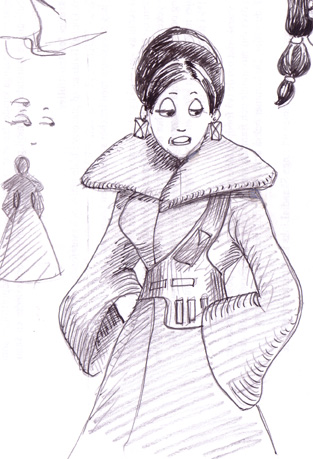